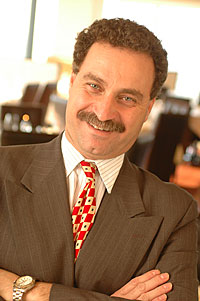 Jim Emad is the sole proprietor of Bentley’s on 27. He’s been working in Charlotte’s restaurant industry for over 40 years. He worked for 17 years at Fish Market Restaurant, formerly on Morrison Blvd., in South Park, before becoming  the General Manager at Lavecchia’s Seafood Grille.  Jim Emad is a seasoned restaurant operator who now has his own dining room in which to display his uniquely sophisticated style of food, wine, and service.

Bentley’s on 27 was in development for almost two years as Jim worked to bring his vision to life. In December 2003, he located the unique space at 201 South College Street atop the Charlotte Plaza Building. In one month’s time, he formed Lauren Taylor, Inc. (the names of his daughter and son) in order to bring Bentley’s (the family name of his wife, Kay) to fruition.

Jim was greatly inspired by French cuisine and wanted to provide a special dining experience to his guests. French tableside, a service style so close to Jim’s heart, was the obvious choice. Jim’s vision includes classic French dishes prepared and presented at the table with the use of a gueridon. The gueridon, a mobile cooking cart used in French tableside service, is rarely seen in dining rooms today. In response to the casual bistro style, now ubiquitous in restaurants, Jim wanted to bring some excitement and theater back to the dining room that would pair seamlessly with the stunning panoramic views of Downtown Charlotte’s skyline for an unforgettable evening.